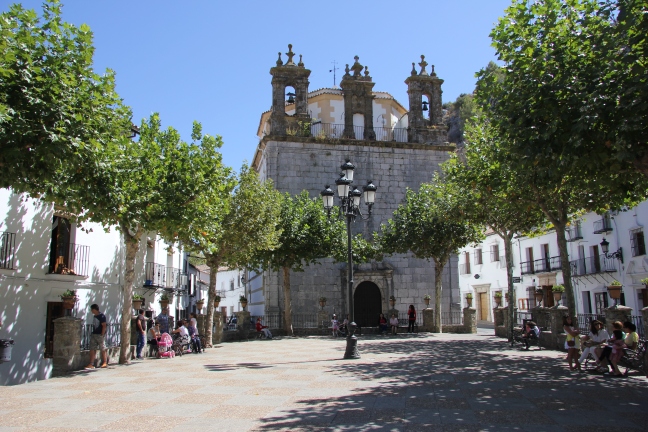 A key motivation for blogging is the inspiration this provides to get out and about and see things.  And so we set off early one autumn morning to visit Grazalema – a village famous as a centre for hikers seeking challenging and spectacular mountain scenery. 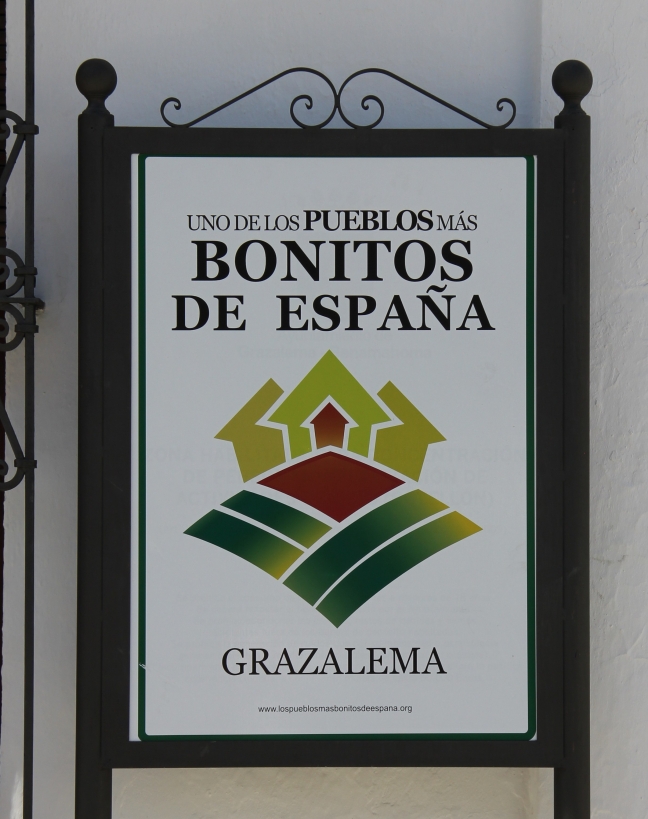 This pretty pueblo blanco was established in Moorish times by Berber settlers who found a home-from-home in the beautiful mountain setting that is now the Sierra de Grazalema National Park.

The village is as famous for its winter rains as it is for being a walkers’ paradise, and these first settlers introduced sheep to graze on lush vegetation, laying the foundations for the town’s huge commercial success as a producer of woollen blankets – or mantas de Grazalema.

The village is laid out in serried ranks – no opportunities for urban sprawl and satellite urbanizaciones here: Grazalema sits snugly in the embrace of its mountain backdrop.

The architecture is pristine and homogeneous: white painted walls, cedar double doors with metal studs, neat variegated terracotta roofs, the ubiquitous rejas (window grilles).   At a glance the main point of difference between many neighbouring properties is the choice of door knocker: hand of Fatima, or lion’s head?

Look closer though and each house is delightfully distinctive – the joy is in the detail: 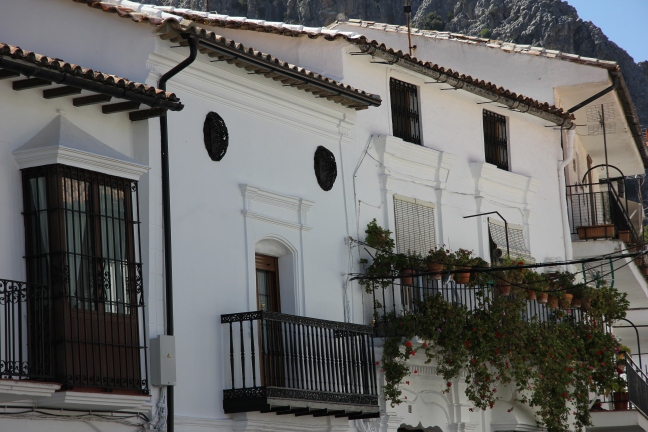 and the grand houses of the cloth merchants are particularly notable. 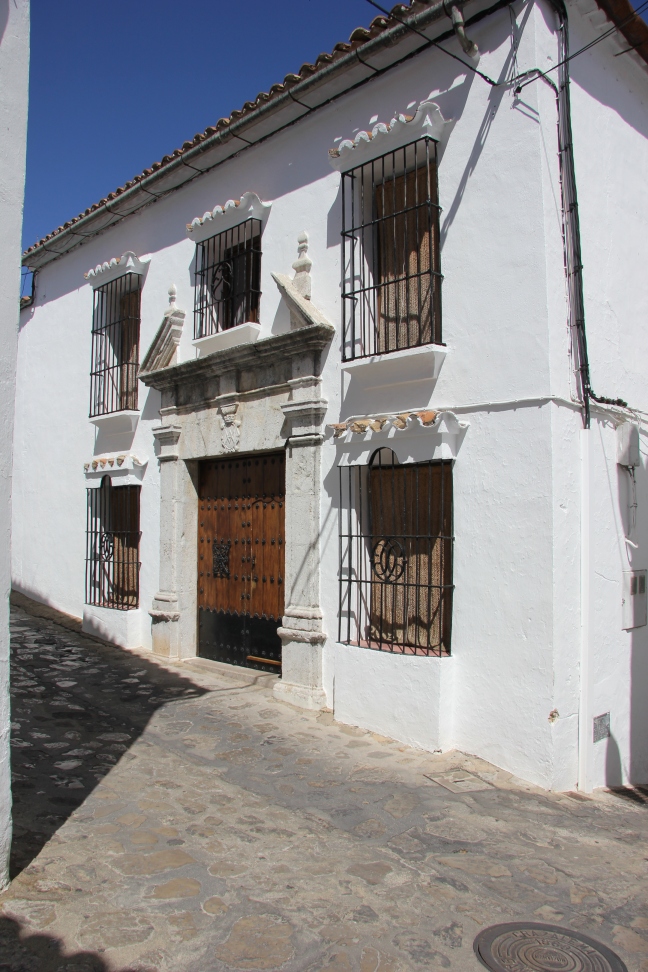 The central square – Plaza de España, built in the 18th century – a period of great wealth in Grazalema thanks to the cloth trade – has a French air; the paved surface of the square is elevated – a raised platform with occasional steps up through gaps in decorative railings, and a canopy of plane trees provides shade for cast iron benches. 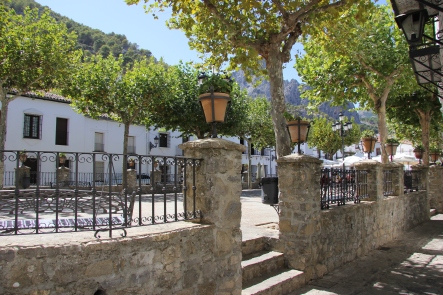 At the head of the square sits the fine church of Nuestra Señora de la Aurora de Grazalema, constructed between 1760 and 1800, one of several in the town, all paid for by blankets.

Grazalema is an important town – it even has its own flag!  (See below: Europe, Spain, Andalucia, Grazalema). 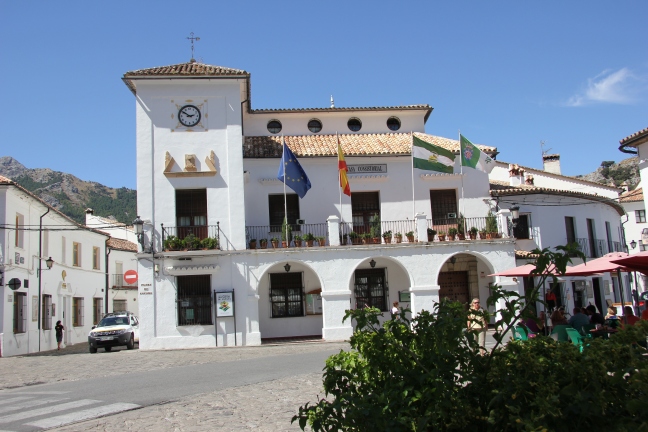 On this late September Sunday the town is fragrant with jasmine, and still buzzing with tourists and visitors, many of them Spanish.

An occasional, improbable luxury coach heaves into view, somewhat dwarfing the little village houses in the background – quite which of the narrow streets allow coach-sized access to the square is a mystery!

The crowd in Grazalema is an eclectic bunch: slightly stunned seventy-is-the-new-sixty pensioners in cropped trousers and stacked mules disgorged from coaches, watch-clocking and counting the minutes til muster; relaxed Spaniards enjoying a leisurely family meal; care-free, dusty walkers with backpacks, bandanas and all the time in the world; and urgent, lycra-clad cyclists – all sinew and thigh.

Like Gaucín, Grazalema still hosts an annual bull run, or Toro de Cuerda, an event celebrated by this sculpture just off the main square.

Grazalema is mid-point of a great circular drive from Gaucin, in other words you can approach from two different directions.

Go via Ubrique (stopping en route to pick yourself up a leather handbag made by the factory that sews for Louis Vuitton, Gucci, Hermes, Chanel, Chloe, Loewe and Carolina Herrera (link here) and you approach Grazalema through rugged, open countryside strewn with rocks. 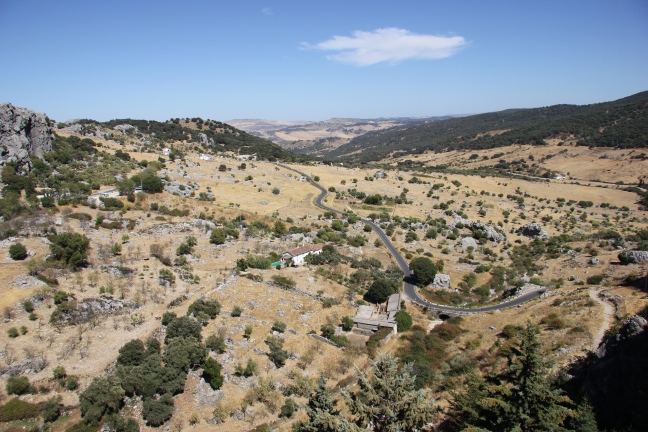 Alternatively come via Montejaque (a lovely little town) or Ronda and approach through a picturesque cork oak forest landscaped by millennia of shifting limestone formations – reminiscent of Yosemite, but with puny, European-scale roads and trees.

Either way it’s about 90 minutes’ drive from Gaucin, and is equally a great place for lunch, or a base for walking – stay a night or two.  Grazalema is a good location from which to access Zahara and Setenil, and other more northerly pueblo blancos.