The thing about the “white villages” of the Andalusian mountains is that they are white.  All their walls are painted white, or “whitewashed”, with slaked lime (calcium hydroxide, or CaOH2, since you ask) and chalk, and their roofs are terracotta tiles.

All except one.  There is a corner of Andalusia which is forever blue. 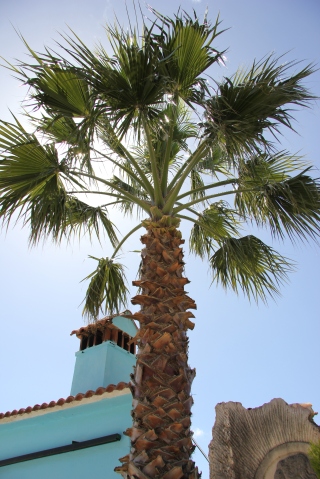 It’s called Júzcar, and it proudly proclaims itself the world’s first Smurf village.  (It’s probably the last, too, for reasons that will become clear.)  And it’s all thanks to Sony Pictures, who released a blockbuster movie in 2011 called “The Smurfs in 3D”, capitalising on the enormous entertainment value of a race of small blue creatures (three apples high) with three fingers on each hand, and annoying squeaky voices.

Brits like to blame the Belgians for the existence of Smurfs, but Peyo was just the pen-name of their creator.  His real name was Pierre Culliford, and that surname betrays an English father.  So if you are British, wipe that smirk off your face.  Peyo invented the creatures while dining with a friend.  He temporarily forgot the name for salt, and asked his friend to pass the schtroumpf.  They both thought this was very funny (you probably had to be there), and Peyo began to weave a story world around it.  Schtroumpf became Smurf in Dutch, and also in English, but in Spain they were re-named Pitufo. 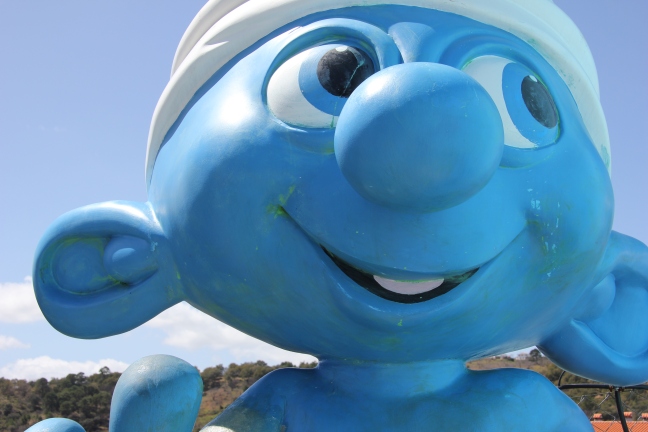 Some people take Smurfs more seriously than they really should.  They are called sociologists.  There is a lively debate, apparently, about whether the 100-plus Smurf characters inhabit a socialist paradise, or a racist and totalitarian dictatorship.  The most recent contribution to this strand of academic debate (presumably funded by taxpayers somewhere) is a scholarly warning about the intellectual danger of basing cultural critiques on cartoon creatures.

The rights to make a Smurf film were acquired by producer Jordan Kemer in 2002 after five years of negotiations.  He spent another six years developing the movie with Paramount Pictures and then Nickelodeon Movies, before finally clinching a deal with Sony Pictures in 2008.  Filming started in New York in 2010.

In spring 2011, Sony approached Júzcar’s mayor with what must have seemed a very bizarre request: to paint their sleepy white village blue in order to promote the movie.  The 240 residents of the village held a meeting and voted to accept, with just one dissenting voice.  That must have been an intriguing meeting, but the conversation we would really have loved to eavesdrop is the one where they sought – and obtained – permission from the Bishop of Malaga to paint their church Smurf blue.  All in all, it took 4,000 litres of paint to transform Júzcar into “el primer pueblo Pitufo del mundo”. 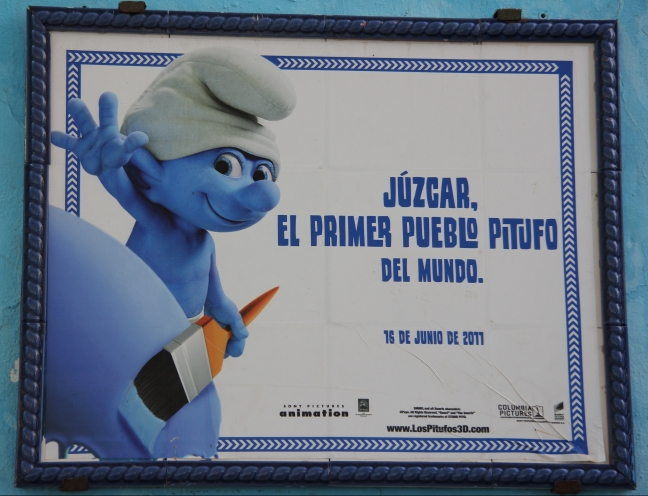 The villagers only agreed to Sony’s request on condition that Sony would pay for the houses to be painted white again afterwards, but when they received 80,000 visitors in the six months after the movie opened, they took another vote, and decided to stay blue.  Many of the residents found they could start businesses as tour guides, and vendors of Smurf merchandise.

The critics were unimpressed when the movie came out, with one remarking that the director could have made it in “in his sleep, which is where all but the most attentive of caregivers will find themselves drifting.”  But who cares what the critics think: the movie was a big commercial success, grossing a total of $564 million on a budget of $110 million.  On its opening weekend it vied for box office supremacy with the almost equally bizarre, genre-blending movie “Cowboys and Aliens”.

With commercial success like that, a sequel was inevitable, and so of course Júzcar’s blue walls were given a fresh coat in 2013 in order to welcome “The Smurfs 2: Nice Gets Naughty” into the world.  The critics were even less impressed than before, complaining that it had “everything you hated about the first movie, and more.”  One opined that “The Smurfs 2 will keep a child reasonably entertained for 105 minutes—but so will a large, empty cardboard box. The box is more likely to stimulate the child’s imagination, and less likely to contain jokes about testicles.”

The accountants were also unimpressed this time, as box office takings were $200 million down on the first instalment, so there were several false starts before the third movie, “The Smurfs: The Lost Village”, appeared in 2017.  The critics remained … well, critical, with one cynic describing it as “a mediocre effort that nonetheless succeeds in its main goal of keeping its blue characters alive for future merchandising purposes.” 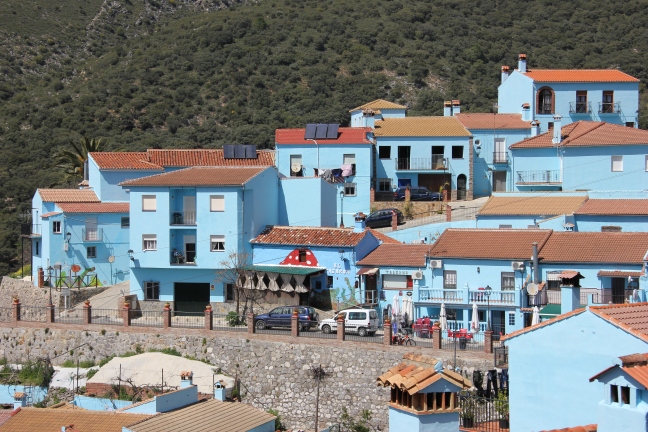 Which should have been great news for the good people of Júzcar, but unfortunately by this time they had fallen out with the heirs to Peyo’s estate, who wanted Júzcar to pay them 12% of all profits made from goods and services using their intellectual property.  The villagers refused, and so in August 2017 they lost the right to call Júzcar the Smurf village.

As soon as we heard about this sad announcement we made arrangements to visit, keen not to miss out on what may very well be a unique phenomenon in the entire history of popular culture.

Whatever your position Smurf-wise, we challenge you not to be impressed by the gallery of landscapes presented by the Genal valley as you drive between Gaucín and Júzcar.

Gaucín is a rocky, mountain village, comfortably upholstered with meadows, trees and flowers that deliver shelter, fragrance, and shade.  As you approach the upper valley the views are dramatically different: harsh and uncompromising surfaces strewn with stones, little or no vegetation, but just as beautiful in their own way thanks to a harmonious palette of pastel-toned, exposed subsoils.  If you have a strong constitution this journey itself is a treat, and offers the opportunity to drop in on villages in both the Lower Genal Valley (Benarrabá, Algatocin, Benadalid, Benalauría, Atajate) and the Upper Genal Valley (Alpandeire, Faraján) en route.

However, as far as the epic, set-piece landscapes of the Genal Valley are concerned, Júzcar is – mercifully, some might say – hidden round a corner. 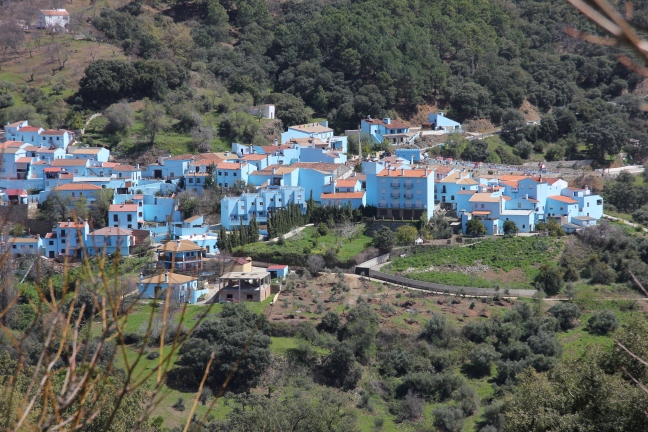 At the time of our visit there were still a few murals on less prominent walls, and a few giant plastic Smurfs tucked away in discreet corners in case an inspector from the World Intellectual Property Office comes snooping.

There are several curated and numbered ‘senderos’ (routes) to follow, including one that takes in the various murals – some of which are more expertly executed than others. 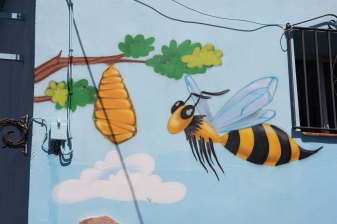 The site of the village is hilly, and a tour on foot is a 30-minute stroll with farly steep ups and downs.  Were it not for the tight security…

…you could avail yourself of a genuinely impressive Disney-meets-Mad-Max zipwire (not suitable for babies or toddlers, according to the sign) and have the whole Júzcar experience in a matter of seconds. 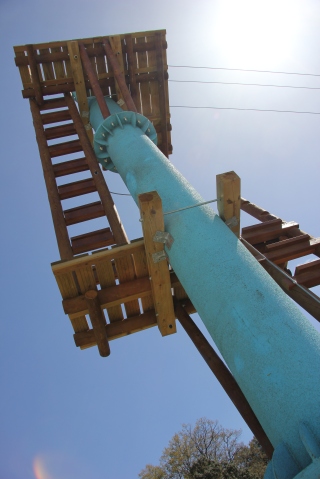 Bring your own harness and carabiners!

And if the worst should come to the worst on the zipwire, your relatives will take comfort from the fact that the village cemetery is the only building that was never painted blue.

We visited in March, it was warm in the sun; jumper but not coat weather.  A coach-load of tourists arrived while we were there.  The village absorbed us all, however we wonder what the experience would be like in the broiling heat of summer during the tourist high season?

Turning off the main Ronda road and heading towards Júzcar, the driver is presented with a series of technical challenges in ascending order of difficulty: in the final 20km your vehicle is funnelled down a ricocheting track too narrow for two vehicles, and at some points only just wide enough for one.  If you have a weak stomach, a trip to see the Smurfs is not for you…and the drive is pretty challenging too!