In the middle-ground of the view from our sitting room window, just to the right of the Sierra Casares (the southern end of the double-headed mountain), lies a hill called Cerro Pelliscoso. 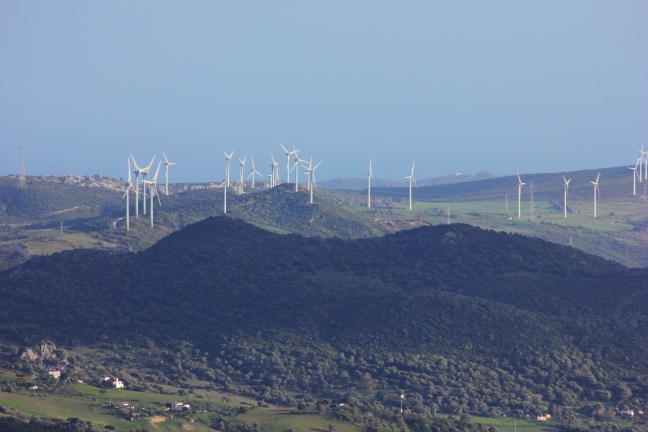 Apart from a smattering of goats, the hill is abandoned, but its long, narrow, plateaued top is strewn with large boulders, and here and there some recognisable built elements rise up out of the plants and bushes.

It is a picturesque spot – perfect for romantic artists and picnickers – with good views north to Gaucín, and south towards the Rock of Gibraltar, the Mediterranean Sea, and Morocco.

If you could travel back in time about 2,500 years to the Phoenician period, you might witness the first formal settlements on this hill. We know little of this era, but Cerro Pelliscoso’s transformation into the town of Lacipo (or Alesipe) during Roman times, from 200 BCE, is better documented. The Romans allowed the town to govern itself, although they taxed the revenue generated by olive oil production, and may have obliged the locals to mint Iberian coins during the first and second centuries BCE. The fortifications are so robust that we like to think there was a Roman garrison on the spot.

In their excellent book, ‘In Search of Andalucía’, Christopher Wann and David Wood describe the lives of early occupants such as the Numisii family, originally from Carthago Nova (now Cartagena), who prospered thanks to the trade in the fish sauce garum (read more about this in the blog post on Bolonia), and who were appointed by the Romans to prominent positions in the community. They also tell the story of the town councillor Caius Marcius Cephalonius who offered a bribe of 4,000 sesterces to secure the position of flamen, a senior magistrate with judicial authority over the entire provincial area.

Lacipo was a wealthy town and an important administrative centre for a couple of centuries before it went into decline. Wann and Wood suggest that the Roman system sucked too many wealthy locals up into the senatorial and equestrian orders, leaving voids in middle-management, so to speak. The town was not abandoned, however, as a Roman road (Via XII) ran up the Genal valley to Ronda, with a branch road (Via XIIa) running from the valley up to Lacipo itself.

Lacipo made less of a mark on history after the Roman period. During the 6th and 7th centuries AD, the Visigoths used it as burial ground – probably serving Casares: a total of 25 graves from the period have been found in and around the area. Then, about 500 years ago as Moors and Christians fought skirmishes and battles in this dramatic landscape, our time-travelling witness might well have seen Lacipo’s defensive walls intentionally destroyed by one side or the other, leaving the hill much as we find it today.

Approaching by car from Gaucín, it’s a bit of an adventure – mostly for the car. Take the road from Gaucín towards Manilva and turn right onto a rough track just before the turn-off to Casares. The ruins are labelled on Google Maps as ‘Ciudad Romana de Lacipo, Diseminado la Alqueria, Casares, Spain’. In satellite view, you can clearly see the track which terminates at the bottom of the hill, just short of your destination, by some rectangular water deposits.

Park here and the ruins are dead ahead, on the ridge of the hill.

The path starts above the water basin, turns right through a wire gate and then veers off to the left (towards Casares) for a while, rising gently with the land until you cross the line of the ridge and can turn right onto a path that heads upwards towards the settlement. Make sure you explore the whole plateau, as the ruins extend the full length of the hill. 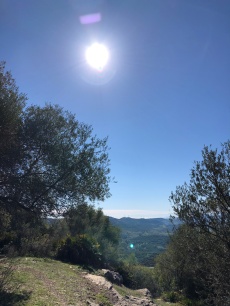 There is a stillness here – it is a perfect picnic spot, among the broken walls, enjoying the spectacular views, and distracted only by the hypnotic overhead wheeling of the thriving vulture communities of Casares.